When the hemp bill was passed last year, it generated a lot of excitement in the industry. Unlike recreational pot, which still remains a Schedule I substance making it unable to cross state lines, there is now a path for cannabidiol (CBD) to do so, provided that it’s derived from hemp. The challenge is that it can be a fine line between hemp and marijuana, and even law enforcement has had a tough time being able to tell the difference.

It’s still up to individual states to determine whether they want to permit hemp-based CBD products, but it’s still a much easier regulatory climate to operate under than the one for marijuana. Charlotte’s Web (OTC:CWBHF) is a great example of a company that has taken full advantage of the farm bill being passed, with its products now being sold in more than 8,000 retail locations across the country. It has been dominating the market already. In its most recent quarter, sales reached $25 million, which is a 45% improvement from the previous year.

However, that puts the company at a run-rate of around $100 million in sales for the year, far below what some producers in the industry have been able to achieve without even tapping into the U.S. market. Canopy Growth Corp (NYSE:CGC) brought in CA$90.5 million in revenue just in its most recent quarter. The Canadian company does have its sights set on getting into the U.S. hemp market, but whether it’s worth it or not is the big question. 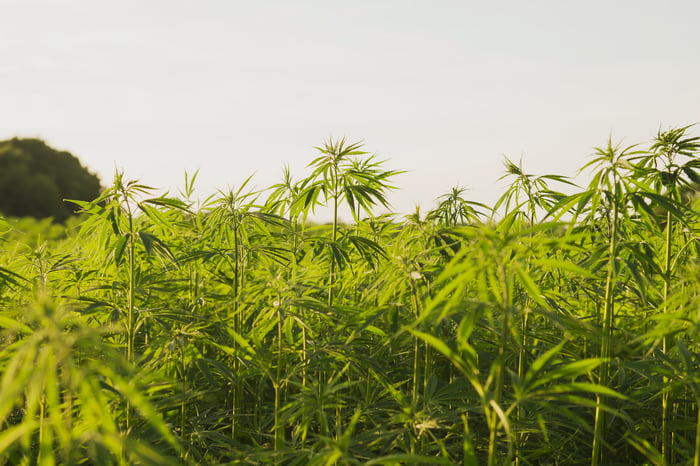 The market just isn’t that large

For cannabis companies that have already been focusing on THC and other non-hemp products, offering a new line of products may not be a brilliant idea. Especially given that the hemp market is not expected to be all that big. The total CBD market in the U.S. could be as big as $23.7 billion by 2023, according to the Brightfield Group. However, when it comes to hemp-derived CBD, that number is much smaller, with some estimates only coming in at around 10.5% of that total figure. At around $2 billion, that’s smaller than the total California cannabis market is today. This year alone, legal cannabis sales in the Golden State are expected to reach $3.1 billion. That’s just one state, and it puts into perspective just how small the CBD-based hemp market really is.

Other factors that will prove challenging

Not only is the market not huge, but there are also many Canadian cannabis companies looking to make their way into the U.S., and hemp is currently the path of least resistance. This guarantees lots of competition vying for an already limited market.

Then there’s also the educational cost that will inevitably come with marketing hemp-based CBD products. Currently, there’s an uphill battle in convincing medical professionals and patients that CBD is helpful, explaining the difference between hemp and marijuana, and demonstrating how hemp-based products may be different.

What should companies do?

For companies like Curaleaf Holdings (OTC:CURLF) and MedMen Enterprises (OTC:MMNFF) that already have operations in the U.S., the solution is easy: Keep growing throughout the country and wait as more states legalize pot. For non-U.S. companies, the best option may be to simply expand into other parts of the world, build up capacity or improve the efficiency of existing operations. Going into hemp, however, may be more trouble than it’s worth.